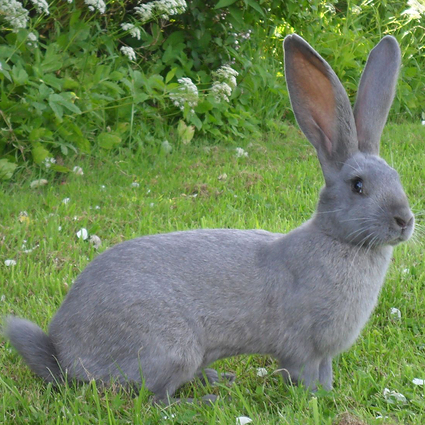 The Continental (or Conti) is one of the largest and oldest breeds of Rabbit in the world with documentary evidence suggesting that they may have been around in the mid 16thcentury. Most Contis are descended from the even more ancient Flemish giant which was created by breeding large examples of fur and meat breeds together.

The first breed standards were written in in 1893 and there are two varieties, the coloured continental (which we keep) and the white continental. These are the only rabbits that receive extra points when shown the more they weigh. 7 to 10kg is not unusual and the heaviest rabbit Ralph from the UK weighed in at a massive 53lbs!

These rabbits on average live four to five years although with exceptional care can live longer. They are gentle giants, friendly and very intelligent and often act more like dogs than rabbits. They are easy to train and can be trained to use a litter tray and therefore can make great house rabbits. In order for these rabbits to be relaxed in human company they need to be handled gently and frequently when young.

A small compact rabbit with a super-soft rex fur which is comprised entirely of plush undercoat.

The gene that causes rex fur was first discovered in France in the very early 20thcentury and the breed was first recognised and soon people starting breeding for smaller rabbits with the rex fur. European breeders crossed Rex’s with the Netherland Dwarf to create the Mini Rex rabbit we have today which was first recognised as a unique breed in 1988.

Normally a calm, friendly and curious rabbit this makes them great pets although you should avoid grooming them too much because of their fur. They will happily live in smaller housing or hutches and enjoy daily interaction from their owners.

We have several interesting colours of Mini Rex and will have young rabbits available to buy soon!