Our Alpaca journey started in late 2010 when Michelle sold her business and announced to me at a dinner party that she was going to buy a few Alpacas. We have come a long way in nine years!

We originally bought eleven Huacayas and later in 2011 we bought three suri females and a male. We quickly decided by the end of 2011 that the direction we wanted to go in with Alpacas was to become a top breeder of Suri Alpacas. After much research we bought three further females and a young male that were all offspring of a recently imported male Puccara Sur-Real Rapper of Springfarm. We also bought a few animals from Simply Suris at the time which increased our female Suri herd to ten by the end of 2011, with a couple of potential stud males. That was the start. We had genetics at the time from Accoyo Bulleyman, Suri Wonder Dream, Rapper, Bozedown Magnum to name but a few.

What really impressed us at the time were offspring of Macgyver a US male from the Accoyo Bruxo line. If your reading this and you have done your research you should know about Macgyver. We were aware in early 2012 of two imported grandsons of Macgyver in the UK, one being Rapper and the other being the Synergist. We decided with Chris and Vicki Agar of Springfarm Alpacas that what we really wanted at the time was a quality coloured son of Macgyver and to import him to the UK. It was not worth going to the States for one so we went shopping for several males and ended up importing five, four shared and one wholly owned by Chris and Vicki. We went to Macgyvers home, Sierra Bonita Alpacas in Utah and bought one of Leslie Loveless retained Macgyver sons Aslan, who was also related to another famous male Helios, we also bought the only ever grey Macgyver son Silver Rider plus a full Accoyo male, Amadeus and another Macgyver grandson and son of the famous black Suri stud male Sniper called Victor.

These animals, particularly Aslan have transformed our herd in the last few years and we have now got backcrosses on our farm of these American boys. The most successful mix to date has been Aslan, followed by Amadeus for us. All these breedings have worked best from our UK Bulleyman lines and our Rapper offspring.

It's not all about show success but about fleece, this is a fleece animal after all. But I was particularly happy to have the judge describe one of our white boys at Showtime as having the most commercial fleece in the ring. We only attend the biggest shows, as that's all we have time for and we want to be competing in large, meaningful classes that unfortunately do not happen at the smaller events.

It has taken us until now to feel that we are ready to offer quality bloodstock animals to others and share what we have started. As of this morning we have 50 females that I would consider high quality breeding stock. We have various lines on the farm which appear to be genetically fine without the loss of lustre and density with one female in particular at eleven years old having a fleece with an average micron of 19, with a low SD and decent cutting weight. We have six of her female offspring on the farm all of which carry these traits and one of her granddaughters took champion white female at the National in 2016. We have just (grudgingly) sold her daughter from last year and one of her granddaughters. These are the first from Itisha's line but we know that the people they have gone to know what they have got and will, like us continue to strive to take the breed forward.

A little more about Macgyver below.

Macgyver's CV is quite simply unparalleled!

In our import we wanted to add other diverse and successful genetic lines, particularly in white suri stud males – and this is exactly what we have achieved with lines from Torbio, Uribe, Ganador and Bruxo who were all part of the PP Accoyo import in to the states in the early 90's and where some of the best suri alpacas in the world have come from including Macgyver. 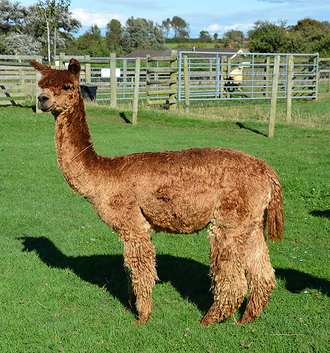 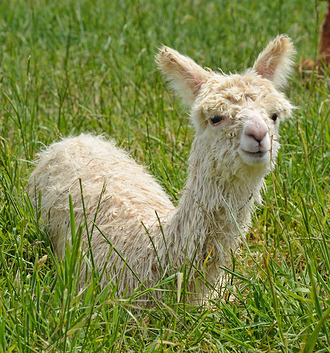 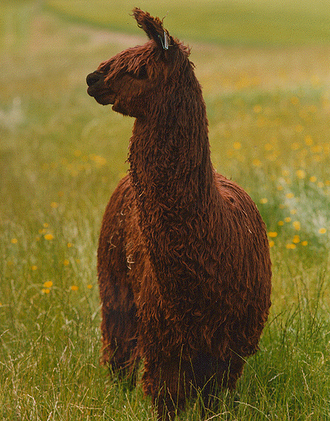