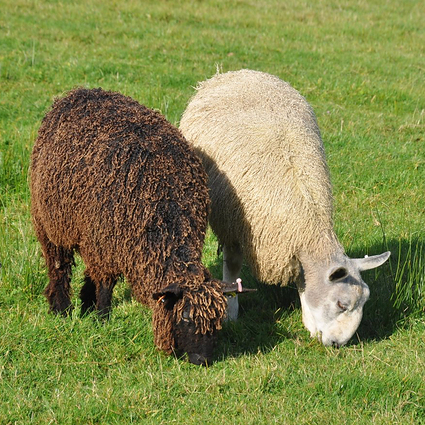 The Wensleydale Longwool sheep as you would expect originated in North Yorkshire. The Wensleydale is probably the heaviest of our indigenous breeds and it is a visually striking sheep with considerable presence. First bred and recognised in the early 19th century from a now extinct longwool breed from the river Tee’s and an outstanding Dishley Leicester ram named Bluecap. The breed was first developed to produce hardy rams for crossing on to hill sheep to produce their beautiful highly lustrous fleece.

The breed produces some of the finest and most valuable fleece available in this country and the herd book is split in to whites which all have a blue face and blacks which are much rarer but can vary from grey to black. With only just over 1000 in the pedigree herdbook these are really rare sheep and we are delighted to be helping in a small way in preserving this lovely sheep.

Why do we love them, just look at them! Their fleece looks just like the Suri alpacas that we love so much and as with all of our sheep they are really tame and friendly.