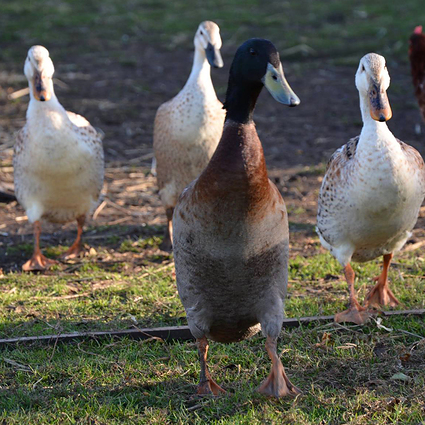 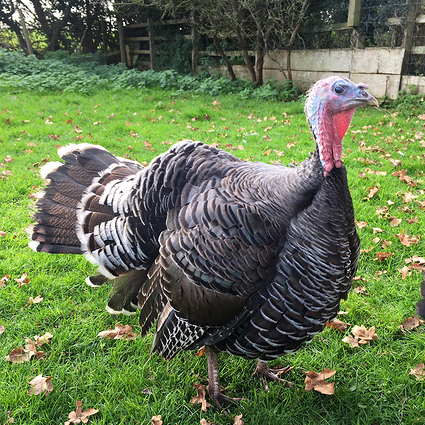 Ducks need no introduction. They are all charming characters. The Indian Runner duck which stands upright is primarily an egg layer but great fun to keep as a pet. Watch them charging across a paddock slugging first thing in the morning when you let them out or trying to make their way against the wind. Hilarious!

We also have a few Muscovy ducks that seem to have adopted us, they are a native of South America but are kept here as a meat bird, genetically a half-way house between a duck and goose the Muscovy’s you see here are taking advantage of the free food available when they fly in.

Ayelsbury ducks. An old fashioned meat bird but great to have waddling around the place, the typical white duck you see in the countryside and big. Another duck we love to have around.

The turkey is a large bird, which is native to both North and South America. Males of both turkey species have a distinctive fleshy wattle or protuberance that hangs from the top of the beak (called a snood). They are among the largest birds in their ranges.

Our turkeys, The Norfolk Bronze are a meat breed (although they are safe on the farm here). We love to see the Stag displaying to his girls in the Spring. A large but impressive and friendly bird that we love to have around.