We had never intended to get involved with Llamas at West Wight Alpacas however as our alpaca walking and trekking business took off and both us and the alpacas were struggling to cope we decided we needed to look at some different options. Alpacas at the end of the day are not natural trekking animals and have not been bred for it as Llamas have and although they are happy doing perhaps up to two forty minute walks a day forcing them to do more is unkind and not in our ethos as a business.

We decided to look further at Llamas in 2014 and started to look around the UK at what was available, the search proved far more difficult than we had imagined! While there are a few Llama breeders in the UK with really good Llamas these tend to be located in the regions of the country where there is a problem with Bovine TB. While we know that their bio security is excellent as is their fencing we can't however take even the tiniest chance of possibly bringing TB to the Isle of Wight, which is a TB free haven. The other issue with UK Llamas is that they can be fairly interbred and originally come from a limited supply of zoo stock and are what is known on the continent as classic or what I would call unimproved. The other problem that we have come across is that some (not all) have used males for breeding that do not have a nice and easy going nature as Llamas should have and the one particular stud male I am thinking of was kept in a very high small pen on his own (something you should never do with a camelid) and he was almost not handle-able. He was also passing this poor trait on to his offspring. This was a well-known male within the UK Llama world which has been well used with lots of offspring. Watertown Llamas in Devon is the absolute exception and we would have bought llamas from there if it were not for their Devon location.

So what next? A friend of ours Vicki Agar had seen some amazing Llamas at a show in Paris. These were from the Sud Tyrol in the Bolzano region of Italy. Next a trip to Italy was arranged in very early 2015 to Kaserhof to see Walter Mair and see some of his 200 llamas. All I can say about Walters Llamas was just wow. Walter had imported almost all of his herd from Llamas Del Sur in Chile and a great deal of those Llamas were of Argentine heritage and in our view Argentines as they are known are the best Llamas in the world particularly when they are mixed with the best Chile has to offer. Vicki came along on this trip to advise but you have guessed it some came back with her as well! While there we walked in amongst his group of thirty plus stud males who were all calm and placid and obviously all entire, something that would not generally happen with UK Llamas. The British llama Society even recommend you castrate all Llamas that are going to work, this is absolutely not necessary with properly bred animals.

So you guessed it, we bought a few, well actually a few more than a few and we have eight females, one appaloosa girl from Switzerland and one cria that was born this year and seven males which include a big Argentine male from Switzerland called Tapherel, our headless llama or at least he is in the dark with his black head. These llamas have all joined our trekking team and we have five cria due in April 2017. I had never seen a Suri Llama prior to going to Italy and they are very rare with Walter estimating that there is less than one hundred in Europe. We have three of those in our group which includes our stud male Ikarus. All of our boys live together, they are entire and they are gentle even when walking past the girls on the farm, exactly what we were looking for. We have trekked with the boys for 11 miles and Walter takes his on three-day treks in the Alps.

A side benefit to Argentine Llamas is that they never had alpacas in Argentina and their llamas were bred to produce a super fine fleece making them in some ways look like giant alpacas. Our female Llamas when tested had an average micron of between 18 and 22 with a low SD making them have a wonderfully process able soft fleece with similar qualities to alpacas being hypoallergenic and super soft.

Its pointless having these beautiful animals that are so rare in the UK and not breeding them and offering them for sale. They make the very best trekking animals, pets and fibre providers. We can offer anyone interested in our llamas a complete service from setting up a trekking business or how to just look after them as pets. We are always on the end of a phone. Come and see us and learn a bit more about Llama Karma. 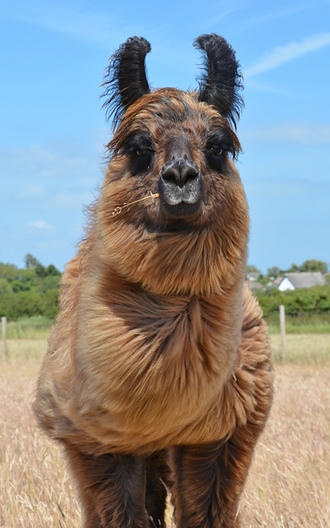 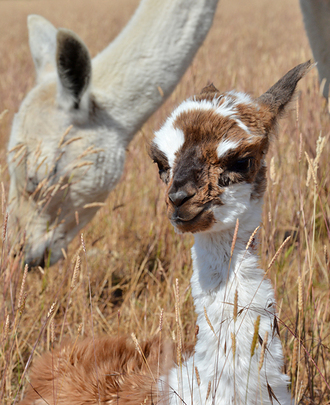